Buying the finest Arabica coffees available doesn’t mean having a perfect raw material: indeed, as already mentioned, the “aroma turbo” effect due to pressurisation implicates a considerable increase in unpleasant smells too, caused by defective beans. We have to eliminate them.

In the mid-Sixties, my father Ernesto Illy found himself presenting his coffee to Ueli Prager, the legendary founder of the Swiss chain Mövenpick. When Prager received the cup to taste from the technician who had made the coffee, he sniffed it carefully and, without even tasting it, said:

Dear Mr. Illy, if this is your coffee, we have nothing left to say to each other.

He stood up and walked out, leaving my father astounded. A stinker bean had found its way into that cup and thanks to the “aroma turbo” had given the Espresso the most unbearable smell!

That was the day my father understood that he had to invent a system to select the coffee we roasted, bean by bean… or abandon pressurisation!

Coffee went from being a luxury to a commodity in the mid-Sixties, and it was then that the harvesting system switched from picking to stripping, to save on labour costs. With the picking system, one cherry at a time was picked, eliminating all the defective cherries, whether they were unripe (not red enough), overripe (dehydrated and brownish in colour), or damaged by flies, causing them to stink. With the stripping system, on the other hand, all the cherries on the branch were harvested at the same time, including those with defects. This sudden change in quality caught my father by surprise, because after centuries of raw coffees bought with the certainty that their quality was excellent, there suddenly began to be an almost constant presence of defects in every batch of coffee purchased!

My father contacted Sortex, an English company specialised in the elimination of defects in hazelnuts and, after a few years of joint research, perfected a machine capable of eliminating coffee defects.

The principle is based on reflectance: the coffee bean drops down in front of a series of sensors which measure its colour in special bands of light. If the bean is too green, it means that it is unripe and, consequently, sharp and lacking in aroma. If it is too red, then it is overripe, woody and with oxidised aromas, and if it is fluorescent, it is definitely a notorious stinker. Once the defective beans have been recognised, the machine eliminates them with a jet of air which changes the direction of the beans as they fall: it might sound simple, but in actual fact it isn’t. The amount of know-how required to programme the software of these machines is simply huge. They are used today in all the grower countries in the final phase of preparation of the sacks of coffee, but the people that use them know much less about the subject than we do and we are, consequently, often forced to “re-select” the coffees that we received, because they still aren’t “clean” enough.

If my father hadn’t invented electronic selection, the famous Amici Caffè would no longer exist! 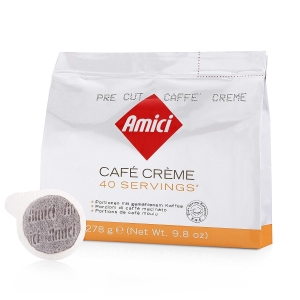 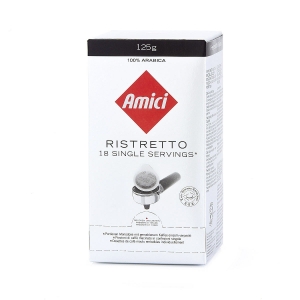 18 E.S.E. Portions of Ristretto in Singlepacks