Grandfather Francesco understood that roasted coffee had two enemies in the surrounding environment, in the air: humidity and oxygen. The first, which is always present in the air in some quantity, is “sucked out” of the coffee, which is completely dry after roasting: imagine how the last water molecule leaves coffee at the speed of very hot steam at a temperature of 222°C! During the roasting process, this water becomes very high pressure steam (consider that green coffee that has not yet been roasted contains approximately 20% of water) and it combines inside the cell with CO2 which forms thanks to the Maillard reaction, a pre-combustion process during which coffee is transformed, creating its aromatic compounds.

This mixture of gases, that is steam, CO2 and aromas, reaches unthinkable levels of pressure, which cause the intercellular walls to collapse: it is as though we inflate a football so much that it bursts. It’s different in the case of coffee cells, however, because one cell is attached to the next one, meaning that they cannot explode like popcorn, they can only “dilate”, creating a myriad of cracks in the walls that separate one cell from another.
This phenomenon stabilises when the temperature starts to drop at the end of the roasting process: the water has all been removed and the remaining gases are trapped in the cells, with a pressure of about 20 bar, meaning 20 litres of gas per kilogram of roasted coffee. This is what creates the richness of coffee, because it is in these gases that all its aromas are trapped.

My grandfather realised that if he left the coffee exposed to the air, this would transfer humidity to the coffee, because it is so dry. And this would have caused the shrinkage of the woody material of the intercellular walls, opening those cracks that the pressure we spoke about earlier has created. In this way, the gases would have been released and coffee would have lost most of its aromas, which are, by definition, gaseous (our sense of smell perceives volatile molecules only).

Removing the air that surrounded the coffee immediately after roasting with a very strong vacuum and replacing it with an inert gas, chemically stable, with no oxygen or humidity - like the nitrogen that he chose for his packaging system - he permanently eliminated the oxygen and humidity from his wonderful product.

But it was my father Ernesto Illy, a chemist, who discovered why the aroma of our coffee increased so considerably – so much so that I call it the “aroma turbo” - when it was packaged this way. Examining it under a microscope, he noticed that coffee fat (approx. 14% in Arabica coffee) tends to concentrate in tiny droplets on the intercellular walls after roasting and, thanks to their extremely low molecular tension, they dilate after a few days, completely covering the internal walls of the cells. He knew that the aromas, unlike gases like CO2 which are capable of “crossing” an oil, become trapped in oil once absorbed. Seeing the cell walls covered in fat, he understood why our coffee was so much more aromatic than any other coffee: not only had my grandfather preserved all the aromas in the cells, during that phase which we call “ageing”, which lasts about 15 days after roasting, these aromas were evidently set inside the coffee fats too.

If our aromas were not set into the fats, when the cells are broken up during grinding, they would be released and lost before reaching the cup. Being set into the fats, when the water brews coffee at a temperature of 92°C, the fats are no longer able to hold them, so they are released into the foam of the espresso. This is why, when a Amici coffee is served at the table nearby, you can smell the aroma up to five metres away. That doesn’t happen with any other coffee!

If my grandfather’s aim was to avoid the oxidisation processes endured by coffee in the air (remember that coffee was packaged in paper bags at the time, like bread), we grandchildren still owe him a big thank you, because he found a method capable of expressing the very best of coffee in a cup! 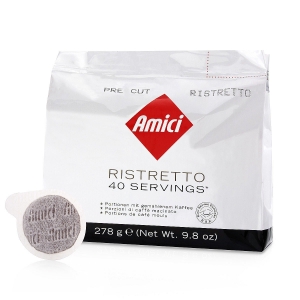