Blog Our coffee's excellence > The E.S.E. System >How the E.S.E. Pod Was Born

How the E.S.E. Pod Was Born

The first patents for coffee packed in filter paper, something like a teabag, dated back to 1910 and had long since expired, but my father needed a machine… called a “pod machine”, to portion the ground coffee into these bags. He received it from an American, Cyrus Melikian (1920–2008), who went down in history as the inventor of coffee vending machines.

He brought the machine to the “factory” (which was what my father called his business) and worked on adapting it until he was able to create his coffee pod, compressed - this time - thanks to one of his patents, the “revolving press”, which compacted the coffee without it sticking to the press.

I remember those years well, even though I was just about fifteen, when my dad would go crazy after Saturday lunch, trying to make coffee with our first home espresso machine, and he could never get the grinding right!

It was ten years before we had our first home E.S.E. pod machine. It was September 1978 when my father launched his first coffee pod machine at Globus in Zurich, built by Turmix: a new age had dawned!

While Eric Favre was still fine tuning his Nespresso capsule…
While Dino Macchi, with his Unoper, was still developing the first capsule that would later become the Lavazza Point… 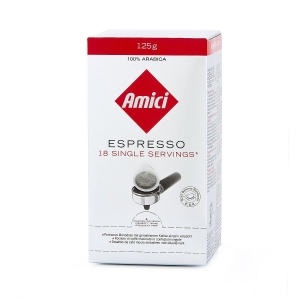 18 E.S.E. Portions of Espresso in Singlepacks