FrancisFrancis! X1: the coffee machine of your dreams

The “Amici collection” cups had only recently been born and I was involved in the art world at a time of incredible ferment in terms of ideas and projects.

The artistic cups were my first experiment, a way of filling our consumers with positive emotions, using attractive and appealing visuals. They thanked us by wanting them for their homes too, collecting them. Sometimes stealing them, like the woman who walked out of the coffee shop with coffee dripping out of her handbag because, she was so worried about being a thief that she forgot to drink it.

I could feel the evocative power, the ability to create emotions, sometimes unconsciously, of the beautiful things around us and I was already dreaming of transferring these pleasant experiences to a coffee machine for use in the home.

One day, we presented our cups in Barcelona, in the middle of Maremagnum, with an installation created by a friend of mine, the architect Luca Trazzi. On that occasion I told him about my dream: I wanted a beautiful machine that would make people smile, that anyone could have in their favourite colour. A machine that would appeal to everyone. Amici would have seen to the technology: we knew how to make the best coffee, even at home.

We were staying at the Hotel Arts, on one of the highest floors, and we had a perfect view of all the constructions of that Barcelona which had been renewed for the Olympic Games a few years earlier. It was a wonder of new and sometime crazy architecture which filled us with that optimism and enthusiasm typical of big cities that are undergoing transformation and renewal. Magic moments that I'd already experienced in New York and Paris, in which the city's energy gets under your skin and somehow leads to create something new. And this energy had leapt onto Luca and me.

The birth of the X1, a design icon

Of course it could be done!

That curve in the air, that ideal ellipse, was the shape of the X1!

The first prototype had a dark wood front panel! It was beautiful. And it looked like it was smiling. The more you looked at it, the more it smiled at you.

The first series was a huge success: at the first fair we took part in, in Frankfurt, all these brightly coloured X1 became an attraction for hundreds of visitors, and within the space of just a few months, importers of designer products from all over the world, from Japan to Australia, from the US to Austria, began selling it.

Everyone loved the X1! One day, we saw it in a fashion magazine, then in an advert for Visa in the US, then in various films, from Spiderman to Angelina&Brad’s MR. & MRS. SMITH… it was touring the world on its own.

And when we looked at the press releases it had generated in 1998, we realised that it had become the most publicised electric appliance in history. The greatest definition was given to it by Wired, which called it retro-futuristic.

But what I like most is hearing customers who've already had it for more than ten years come and tell me how, in the morning, every time they see it, they feel like it's smiling and it makes them want to smile too. Because it’s just cute.

Continuing to make our dream come true, we made it in a whole range of variants: lots of different colours, made of gold laminate, chromium-plated brass, stainless steel, even titanium, and I still drink my coffee at home made with my titanium X1, lighter and warmer than any other metal.

And we have continued to love it, like tens of thousands of people who continue to love its smile. 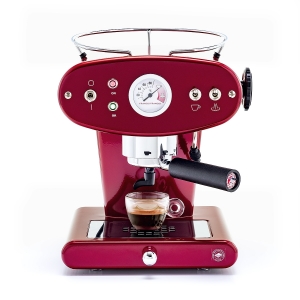 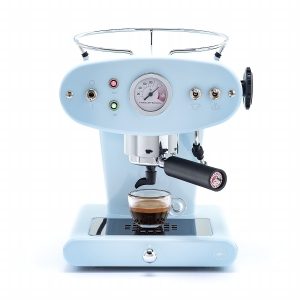 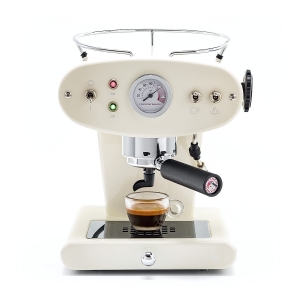 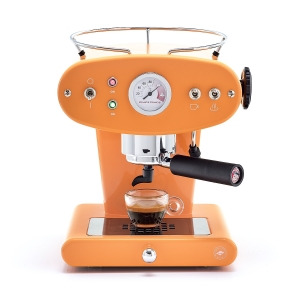