The coffee plant still grows naturally in the shade of the trees in Ethiopia. Coffee is picked by hand, both in the plantations and in the gardens of private houses, where it grows and ripens alongside other crops. It is believed that the coffee plant first originated in Ethiopia, where it can reach a height of 20 metres. The espresso made using the coffee grown here is sweet and floral: the balance between bitter, sweet and acid is expressed overwhelmingly. Notes of jasmine, citrus, peach and other flowers determine its intense and extremely complex aromatic spectrum.

The mainly mountainous region of Sidamo is in southern Ethiopia and is best known for its prized Arabica. The coffee grows wild on the slopes of its mountains and is grown in coffee gardens, small pieces of land in which every family also plants fruit trees and vegetables, or in bigger plots, being later treated in the washing stations spread throughout the territory.

In Sidamo, coffee is important, not only because it drives the local economy, but also for the social and cultural life of its inhabitants. The atmospheric coffee ceremony is an ancient ritual, the actions of which are handed down from generation to generation: being invited to take part is a sign of friendship and considerable respect.

Every morning Ahmed Legesse sips a cup of coffee seated at his desk in his office. From the window, he can hear the sound of the lorries onto which the sacks of coffee will be loaded all day for delivery. Ahmed is calm and he speaks calmly too: he evidently loves his job and knows it will be appreciated the world over.

In Ethiopia, there is a strong relationship between the land and coffee. This is why, despite the difficulties in growing and selling it, Ahmed and his brother have decided to invest in training and quality. The cooperation with Amici Caffè dates back 20 years: a long period in which the two brothers have grown considerably and have set up a very deep personal and professional relationship with us.

Just like his father before him, today Ahmed is trying to pass on all his experience to his children. 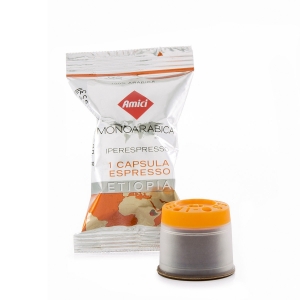 (5/5)
Product rated : Moka Pulcina by Alessi Induction for 3 Cups with 250g of Ground Coffee Very good and fast service. To be recommended